this is an ad cut:

Sync…
..became an issue. I originally started by recording a clock signal from the modular to track 16 on the AW and then routing that back to the modular via OMNI out 4 into a Doefper A119. Some of the modules didn’t like the gates they were getting, so I put another device (Alesis SR16 Drum Machine) in the chain that would receive/send MIDI clock from the AW. The modular now syncs via a Pittsburgh Modular MIDI3.
This allows me to “rehearse/jam” without the AW being in PLAY/REC – the SR16 generates its own clock. This also guarantees I get a correct tempo setting for the AW (when it becomes then lock source)
routing update:

SL1-8: Eventide H9 Return
Playflow…
…is the new challenge.
I can’t just throw anything down and chop it up the way I’m accustomed to*
Individual parts have to run a minimum amount of time to be useful.
Sources for these parts are in different locations and require different methods to generate them.
I’ve decided that I should have a “workable” patch on the modular that will deliver melodic and rhythmic parts on two separate outputs as a guide for the entire piece. The rule I’ve set for myself (for now) is to be able to play the patch live. This also has the side benefit of being prepared for the meetup  (oscpgh) this weekend.
I was originally programming parts on the SR16, but I seem to be getting more interesting things in real time on the modular.
Percussion patch is:

The SYMMETRY control of the Dalek waveform and PROBABILITY switches on the Chaos Computer affect timbre of the noise shaped by the VCA.

I went into the weekend with the idea that I’d give specific musical/sonic roles to the Modular, Boomstar and Blofeld. A couple passes at this approach didn’t seem to intrigue me as much as limiting myself to “Modular only” and layering additional takes on top of the “workable patch”. For the moment this is a really good thing, considering I won’t have anything but the modular and H9 at the meetup (and I really need to be sharp on it).
I’m really motivated by the idea of an entire project made with a single source (modular synth).
I didn’t come up with anything I’d keep, but I also didn’t produce another folders worth of stuff that will sit unused on a hard drive, promoting anxiety as to whether or not it should be thrown away.
This new way of working delivers a kind of satisfaction similar to learning an instrument or first experiments on reel to reels (over 40 years ago).
*actually, I CAN do a lot of chopping and rearranging with the AW, it’s just a lot faster to redo takes at the moment. I fully intend to get good at the surgical editing later.

preparation for OSCPGH 2016 has become a good bit of source material (read: motivation) to stay in the trenches on the new playflow.

OSCPGH is a synth meetup and I build synths. It’s a demo gig for me.

The next two weeks of posts will be equally divided between prep for the meetup and current production technique. In addition to dumping the DAW, I decided to go minimal on sources:

All three synths will be used to make rhythm and melodic parts (I suspect the modular will do most of the rhythm work).

here’s my first pass at a demo rig:

Basic objective is get as much Livewire in the box as possible while still leaving room for whatever makes it function as an instrument. After yesterday’s exploration, it definitely needs another oscillator (AFG).

First pass at signal routing made it possible to put things together quickly, without the typical frustrations that come with doing things a new way.

I have an additional 16 inputs via MY8AT cards. I’m only using one of the MY8ATs with a Presonus DigiMaxLT (the only thing connected is a Shure KSM27).

RECORDER inputs change based on the track. Tracks 1 – 4 are usually recorded from input 4 (or 5 if I want parts of a patch recorded separately).

The modular demo rig got most of the set up attention, but there were a couple of “deep” features on the AW that needed to be set up:

MIDI CLOCK
I installed a Pittsburgh Modular MIDI3 module into the demo rig specifically because it converts, and even divides, incoming MIDI clock. The AW has a dedicated port for MTC but I used the MIDI CLOCK sent via the MIDI OUT port.

OMNI OUTS
Some may not consider these deep, but my definition of deep (in the mixer section) is anything beyond the IN/OUT and MONITOR controls. My OMNI assigns are:

All the returns come back via input channels.

Getting down to work:

Everything starts with the modular.
The newly configured case is the starting point based on some preconceptions and I start patching with those in mind – especially building patches around clocked elements. Before I can use the AW to clock the modular I have to set a tempo is and the AW has to be playing. Until I’m at a point where I can make that decision, I rely on clock signals generated by the modules (gates from Chaos Computer, squares from Vulcan Modulator or AFG). Once I get something I’m ready to work with, I do some calculations and set the AW tempo.

Handling the final mixes was the first thing I considered before making the decision to transition back to the AW. At the moment this only becomes an issue when wanting to share samples/clips of ongoing work. I could easily put a computer in the studio and send a feed of the ST track (mixdown) to it (via ADAT) and defeat the point getting all the computers out, but that’ll take a couple of weeks to get over my purism.

once I get all my post tags together, this post will make sense as it shows up next to “part one”

There’s been a lot of push/pull (here) regarding how I’ve been writing/recording the last couple of years.

I didn’t have a lot of pressure to finish anything beyond a couple of mastering projects and demoing my work with Eurorack Modules. The final decision as to whether or not I should get out of the box and go back to “older methods” had been deferred.
Two years ago I was able to pull off remix on my HDD recorder in 1/3 of the time it would’ve taken “in the box”. The difference between the two approaches is primarily “me”. I’ve concluded, 25 years of tape and recording tricks before using software to produce, has conditioned me to visualize everything as a multi lane sonic highway. All of the looping and plugin signal chains eventually become frozen stems with very little automation beyond a master fade. Logically, this is an extra step when compared to hitting record and and maybe a few punch ins to do something better. It’s probably a good thing that using software is efficient enough to make that extra step appear effortless (read: not last long enough to notice).

The most significant advantage with software (to me) is the potential to infinitely undo everything. Compared to what I call the “linear process”, I can change my mind. I can go back with the knowledge I have today and “do things better”. Despite the options, none of them come close to the value I place on “doing something NEW and better”.

(note: not going to spend a paragraph on “infinite capacity to record everything”)

It’s two years later and there are a lot of folders containing the beginnings and rough mixes of things that were intended to become finished projects. They’re all good places to start and they all have “next steps” that “didn’t work for me”. Regardless of how quick and easy non linear playflows have become, they’re useless to me if I’m not staring at the monitors in disbelief during mixdown.

(note: also not going to spend a paragraph on “time spent sifting through raw recordings for new ideas”)

Maybe, the sticking point is starting out with things that I can go back and change to the point of being unrecognizable. If the initial idea isn’t strong enough to remain permanent, should I be surprised that it isn’t permanent enough to attach to anything I put next to it?

Two weeks ago I pulled the iMac out of the studio and swapped all the routing to the back of the AW4416. In addition to adding a second part to the topic, this post is a marker for where I commit to using this process for at least a year to see what happens (expires 3/30/2017). 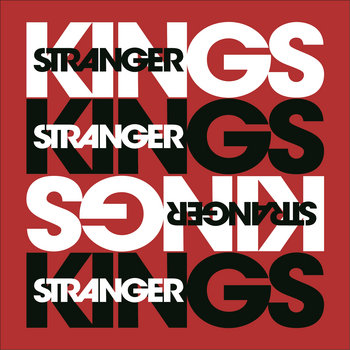 I enjoyed being on this album. I bet you’ll enjoy listening to it even more! 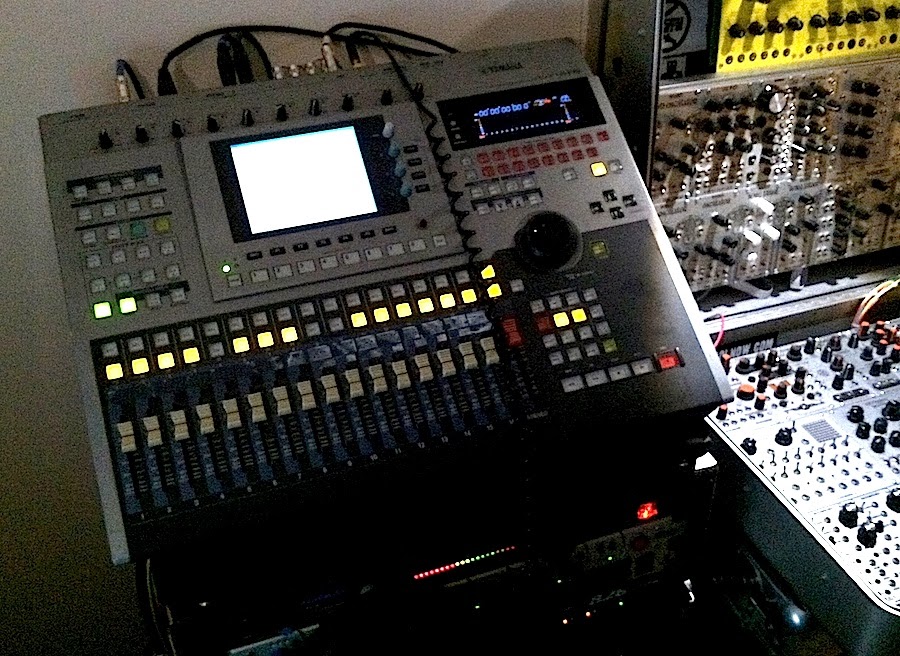 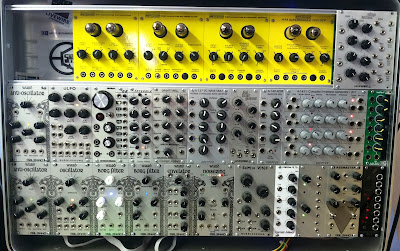 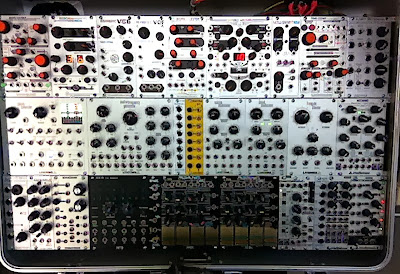 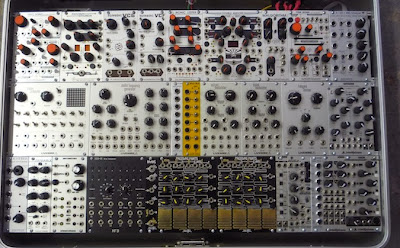 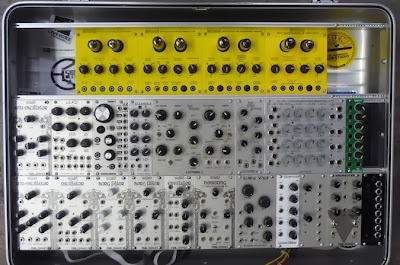 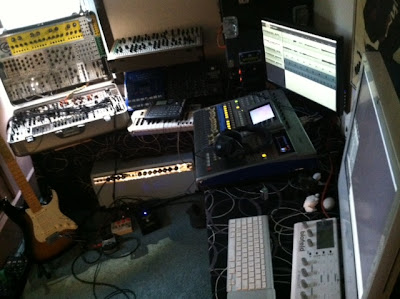